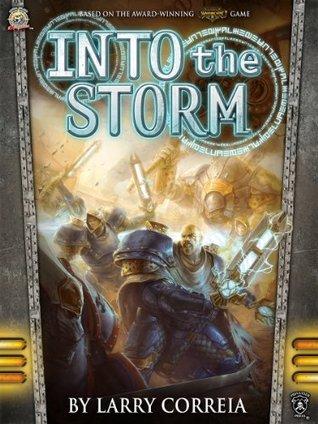 Into The Storm; The Malcontents Book 1 Novel

Into The Storm; The Malcontents Book 1 Novel Product Description

A knight of Cygnar follows a strict moral code. His integrity is beyond reproach. He holds himself to the highest standards whether dealing with friend or foe. And he values honor above all.

The year is 606 AR, and Cygnar has been sorely pressed by its enemies both at home and abroad. In Caspia, the conflict with the Protectorate is about to erupt into full war with the looming invasion of Sul. The Cygnaran military is desperate for soldiers with the skill, strength, and bravery to take up the devastating galvanic weaponry of the new Storm Division. In this climate, every soldier is valuable, even those fallen from the honor expected of a Storm Knight. A group of such menthieves, drunkards, and worsecomprise the Sixth Platoon. All they need is someone to lead them.

Lieutenant Hugh Madigan, a peerless warrior knighted during the reign of deposed King Vinter IV, has spent years in obscurity, punished for his loyalty to the former king. Now he has been ordered back to the front and given command of the Sixth, his task to turn a platoon of miscreants into elite soldiers fit to be called Storm Knights. Time is short, and war is coming. One way or another, Lieutenant Madigan must lead his men into the storm . . .