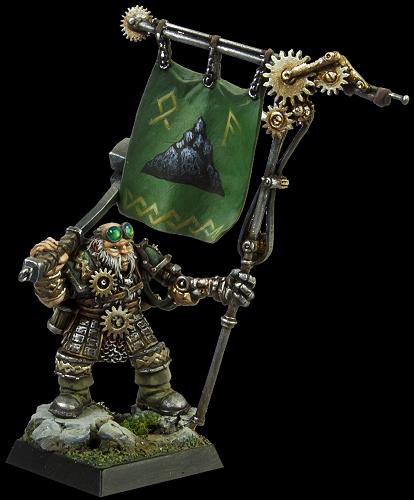 The bull-necked, sour-tempered Erec One-Arm of Càrn Corm was once an engineer of note, a constructor of machinery and apparatus beyond the ken of man and ælf alike. Even among his fellow dwarfs, Erec was unique in his understanding of artifice, the manner in which engines and other such contrivances worked and, indeed, could work, and he guarded his secrets well for amongst the bond-cities and gun-mines there was not one dwarf to match the prowess he displayed in his craft. That changed irrevocably when he lost his left arm and most of his work and equipment to the ever wild Oghurithne. Embittered but determined, Erec re-made himself with steel and wires and ingenuity, vowing vengeance upon the woad-devils of the western reaches, a vengeance that drove him to the host of Càrn Corm for which he bears the standard of Kul-Kunn himself. It is said that he wields it and his ancient, un-named runebound hammer like the dwarf-rírs of old, full of the violence and fury of Branriach itself, the firemountain where the dwarfs themselves were born in ages past.