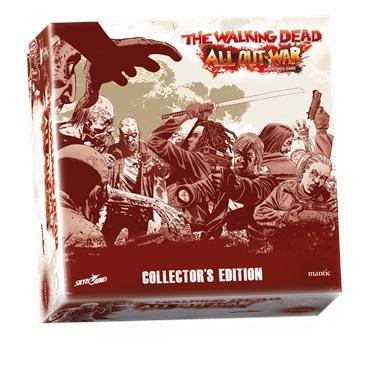 The Walking Dead: All Out War Collector's Edition

The Walking Dead: All Out War Collector's Edition Product Description

All Out War is a game of fast-paced, head-to-head skirmishes in the world of the Walking Dead. Assemble a group of your favorite characters from best-selling comic series, kit them out with a variety of weapons, items and abilities, and battle to achieve dominance in the Walker-strewn Atlanta cityscape. Experience first-hand the desperate struggle for survival faced by Rick and his companions as you negotiate constant threats from both the living and the dead. This is gaming as it should be  fast, furious and fun!


This Collectors Edition box contains everything two players need to get right into the action, including fully-assembled, highly-detailed plastic miniatures, dice, tokens, quick-start rules and terrain including burnt-out cars and barricades. In addition to the All Out War Core Game, this set contains the Prelude to Woodbury solo campaign and card deck, a full set of 3D plastic scenery, a deluxe neoprene gaming mat, a booster pack of Equipment cards, the Lee and Clementine Booster and exclusive Walker Rick Grimes and One-Legged Dale Miniatures!

All of the Cards from the The Walking Dead Core Game, Prelude to Woodbury, and the Volume 1 Equipment Booster, including 19 Event Cards, 15 Solo Event Cards, 16 Supply Cards, and 75 Equipment Cards

All of the Card Game Counters you need to play, including the Kill Zone Template, Threat Tracker, Double-Sided Ruler, Card Scenery and more!