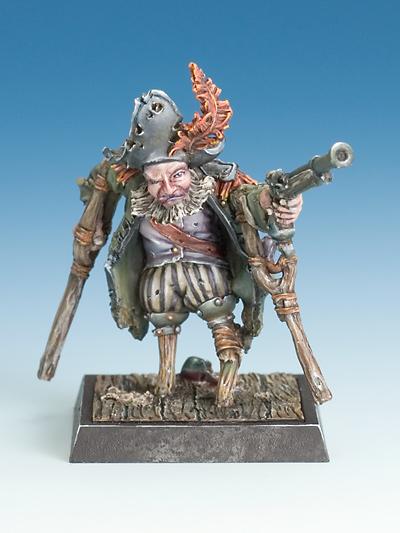 Something in the old geezerâs voice gave Pedro pause and he froze mid-hop to have a proper look at the man for the first time. There did not seem much of him left. The legs were missing, for starters. He was, well, sitting in a low-bottomed crate with wheels and was holding a wooden plank with a handle in each hand which he appeared to use in order to propel himself forward. Two wooden legs and crutches were strapped to the side of the cart, obviously an alternative mode of transport.

Ex-captain Jack is a specialist character of which there can only be one per crew; he costs 30 doubloons to hire. He is a crazy old man, who sometimes switches sides for a little while when hit to hard on the head.

The miniature comes with a character card for Freebooterâs Fate.

The miniature is a kit consisting of 6 parts and has an overall height of approx. 38 mm. The body from head to toe measures approx. 26 mm.

The miniature is supplied as an unpainted kit and requires assembly. The component parts are available individually upon request.