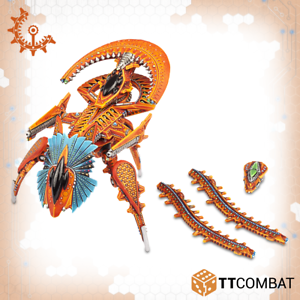 Shaltari Warstriders are an increasingly common sight on the battlefield, and one that their enemies are increasingly wary of. As tough as a hardened battle tank with formidable force fields to boot, a single Warstrider is the equal of several dozen squads of infantrymen.

The Puma is a command variant of the Warstrider chassis immediately identifiable by its colourful crest. Shaltari commanders are warlike beyond reproach and although drawing attention to the presence of a leader is often deadly, the Shaltari's martial honour precludes such tactics, displaying their arrival proudly.

Armed with a massive Sonic Cannon that tears apart buildings by shaking their very foundations into dust, the Puma is deadly even to infantry that are usually safe hiding behind cover. Piloted by the most experienced Warchiefs, a Puma's appearance on the battlefield often spells doom for commanders from younger races. The Shaltari are a fluid fighting force already, but when lead by such an ancient hero, their tactics change so fast it seems to border on precognition.

Although Pumas are thankfully rare for their enemies, the Tegu has been seen more and more in recent battles, particularly on Earth itself. Shaltari rely on Gate technology to teleport troops into the fray, and while traditionally these Gates are lightly armed and armoured, the Shaltari's enemies have caught up to the idea that destroying them severely weakens their battlefield position. The Tegu is an extreme reaction to this enemy movement, putting a large Gate on a tough Warstrider body. Its Sonic Cannon's energy must be redirected in order to power the teleportation relay, but it's a small price to pay for the tactical flexibility such a sturdy platform provides.

Warstriders are great! Flat out, they're just fantastic. With high armour, great Passive Saves and massive Damage Points, they're amazing!

The Puma is where you want your Commander to be (provided you don't want to play some havoc on enemy troops with the Daimyo). It's lovely and safe, and the Clairvoyance ability gives you an extra Command Card each round, discarding another of your choice. That's already really useful. Add to that a 3+ Passive Save, twin Gauss Cannons and the amazing Sonic Cannon (shoot it at scenery and watch it fall) and you have one tough as nails Commander.

Alternatively this kit allows you to build a Tegu. If you're sick of your Gates being blown up, then how about one that's on a Damage 4 Armour 14 chassis? Take that, opponents! The Tegu has a mixed transport capacity, which means you can embark/disembark either vehicles or infantry in a single round. Although it's a fairly slow walker, the flexibility this allows is incredibly good. Put a squad or two of Tegu down in the centre of the board and watch your opponent scramble to deal with them and the unknown units emerging from them each turn!

Contains 1 resin miniatures with the choice of weapons to make a Puma or Tegu Warstrider. These miniatures are highly detailed, approximately 50mm in height.