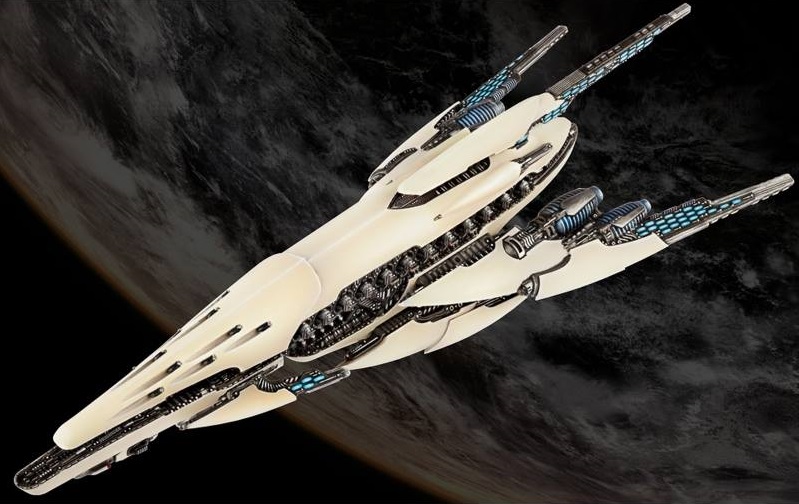 The Heracles Class battleship is a truly awesome vessel and one of the most resilient battleships yet encountered in the Reconquest. Its vast and stocky hull is built around an enormous broadside array of heavy calibre mass drivers, its beam is wide enough to conceal these massive weapons within. The ships characteristic and ominous silhouette is increased by a complex series of manoeuvre fins, lending this leviathan a surprisingly graceful appearance for such a brutal tool of destruction. In addition to its broadsides, the Heracles also features the dreaded Dark Matter Cannon, an enormous prow mounted weapon asmonumentally destructive as it is advanced. In addition to the extensive damage it can inflict, a single shot is dangerous enough to cause crippling effects to the largest of vessels, making it an awesome foil to enemy battleships. The Minos Class battleship is just as formidably vast and deadly as its related class, the Heracles but features an entirely different prow armament. Primarily and most obviously, it carries a pair of Nightfish torpedoes, massive ordnance the size of small ships designed to resist all point defence with sheer armour thickness and mass. Once its torpedoes are launched, the Minos usually adopts an ultra-aggressive approach in order to bring its secondary prowweapons into play. These are the ultra-advanced neutron missiles, perhaps the most dangerous close action weapons yet encountered by the UCM. These are designed to inflict appalling carnage once an enemy ship is penetrated, damaging core systems and causing crippling effects that would normally only be encountered with massive hull damage. This blister pack can be assembled as either a Heracles or Minos class battleship. The manoeuvre fins can be posed, providing modelling flexibility. It is cast in exceptionally tough impact resistant resin and features extraordinary detail. 1:9150 (0.2mm) scale. Length 177mm. 14 Resin Parts total (including optional ones). NOTE: Provided with a multi-part Dropfleet flight stand, designed to track in-game status without the use of tokens. Please Note: Miniatures are supplied unpainted and some assembly will be required.