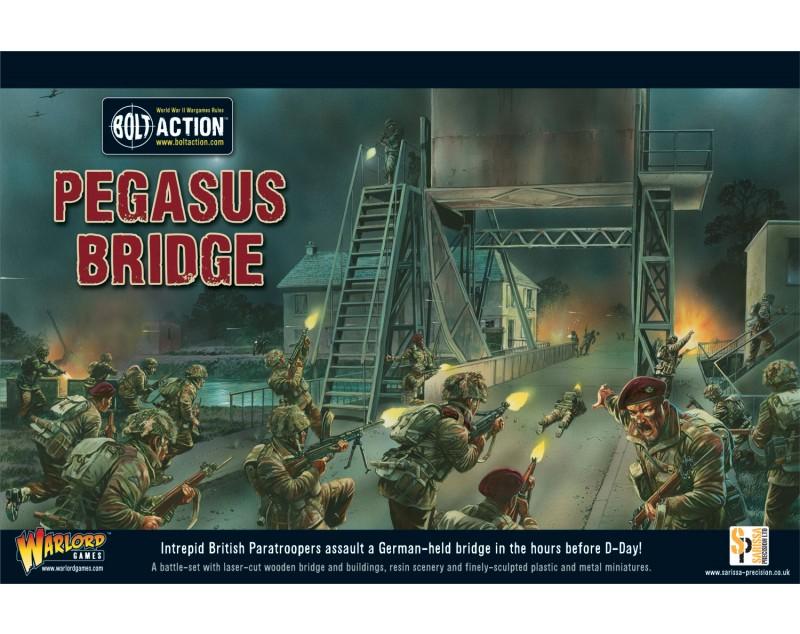 This awesome set contains everything you need to recreate the daring raid that paved the way for the Allied D-Day invasion.
The Battlefield
Using the contents of the battle set, you can really set the scene for this pivotal battle. The centrepiece is a laser-cut model of the bridge itself, accompanied by models of the Cafe Gondre, as well as a pill box, a gun pit and even two telegraph poles!
The Forces
Next come the forces themselves - for the defenders, 20 German infantry, backed up with a 5cm KwK 39 anti-tank gun and MG42 machine gun team. The attackers are a 10-man British Airborne squad plus a 2-man PIAT team, and an exclusive model of Major John Howard, which is only available in this set. You\'ll also get decal sheets for both the sides to help you prepare your forces for battle.
The Rules
Last but not least the box includes a scenario booklet that describes how to set up and fight the battle for Pegasus Bridge. (Remember, this is a supplement for the Bolt Action game, so you\'ll need a copy of the core rules too!)
Box Contents:
Laser-cut Bridge
Laser-cut Cafe Gondres
Resin Gun Pit
Metal 5cm KwK 39 anti-tank gun and 3 crew
Laser-cut Pillbox
Metal German MG42 MMG team
2 laser-cut telegraph poles (on the Cafe sheets)
20 plastic German Infantry and plastic bases
Major John Howard and plastic base (exclusive new model)
10 man British Airborne squad and plastic bases
2-man PIAT team and plastic bases
Scenario booklet
Decal sheets for the Paras and Heer