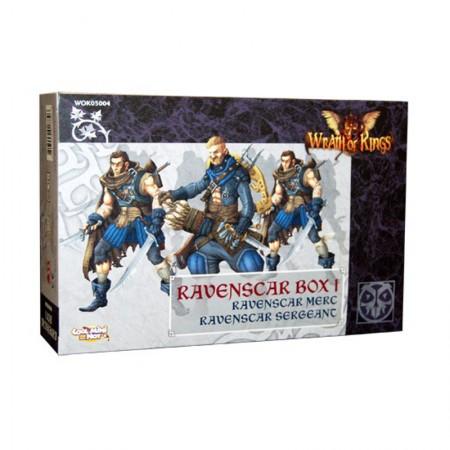 It was a war no one wanted at the worst possible time. Ancient King Arikans throne, empty these last five centuries, had remained beyond the Scion Kings reach, yet always in their thoughts. Centuries passed. Three Scions died. And two remaining heirs drew secret plans for decisive actions, a quick and limited conflict. But hidden hands tugged the tapestry, and unseen players altered the game. A war between brothers now engulfs the five nations as rulers great and small vie for the Empyrean Throne. In the end, only one shall ascend. Only one shall rule. Only one shall survive the Wrath of Kings.
Tough, brutal, and somewhat unruly to the non-Tellorian eye, Ravenscar Mercs have a reputation for ruthless efficiency thats in perfect keeping with their role as rank-and-file troops in an army of monsters. Ravenscar sergeants are no different, and, as some of the most highly-paid soldiers in Arikania, they often spend large sums on powerful crossbows that get them our of the meat grinder of the front ranks. A variety of trick shots and specialized bolts make Sergeants the perfect support for these formidable professional soldiers.
Models are made of plastic.
Contents: