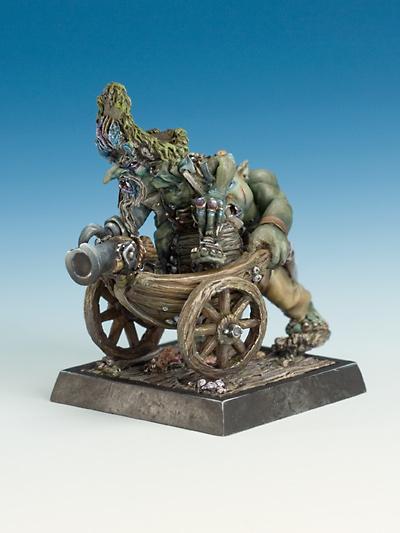 “Faster, Tsifi, faster! Hairies are getting away!”
Tsifi, the currently designated pushpirate, gave his utmost. He rounded a corner on just one wheel, almost tipping Ulgat out of the pushboat. But he was hanging on like a barnacle. It had been worth it, the hairies were right in forn of their cannonette and well within range.
“Halt! Bit left! Bit more left!” Ka-boom! The cannonette roared and spat its missile at the fleeing hairies, bringing down one of them.
“Reload! Reload! Quickly!”
Tsifi deployed the “prop-up and brake” brick and raced to the front to help reload the pushboat’s main weapon. He hoped that all this hard labour would pay off and that he would gain some clue as to where Ulgat kept his legendary treasure…

Captain Ulgat is a leader model of which there can only be one per crew; he costs 100 doubloons to hire. The miniature comes with a character card for Freebooterâs Fate.

The miniature is a kit consisting of 11 parts.

The miniature is supplied as an unpainted kit and requires assembly. The component parts are available individually upon request.