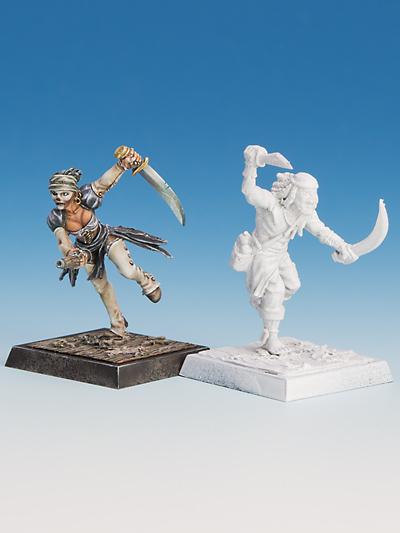 This changed suddenly when the door opened and a new group of pirates entered the pub. At first glance, they were no different from the others already sat there. Upon closer inspection, however, you noticed that not only did they all act ever so slightly arrogant, as if they knew something nobody else did. No, all of them also wore a mystical-looking symbol somewhere upon their body. Whether it was an amulet round their neck, an earring or even a tattoo on the lower arm or somewhere  symbols such as those led to only one conclusion: Cult. People from Asquerosos crew.

Asquerosos Pirates are deckhand characters of which an unlimited number can be hired for the crew for 55 doubloons each. They come with character cards for Freebooters Fate und two markers made of metal.

The miniatures are two kits consisting of 11 parts alltogether.

They are supplied as unpainted kits and require assembly.