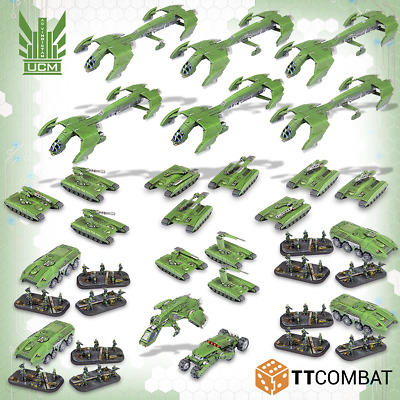 The beginnings of the UCM were bathed in fire and blood. The alien Scourge attack on Earth and the Cradle Worlds left humanity reeling. What was left fled to the Colony Worlds to lick their wounds for 150 years. Humankind toiled for that time, building a brand new army with emerging technology.

In this militaristic state, the United Colonies of Mankind was born. Gone were the lavish ways of old Earth, replaced by frugality and utilitarianism. Now, almost two centuries later, the UCM have arrived at Earth: the focal point of their Reconquest. With militaristic, utalitarian designs, their armies favour mass production and conservation of resources, keeping vehicles small and practical, though no less deadly.

This box contains a perfect small UCM army. With 6 tank-hunting Sabres, 6 anti-air Rapiers, and 12 bases of Legionnaires all in Bear APCs, you have a solid core for an army. All of these are brought to battle in 6 of the ubiquitous Condor Dropships, which provide astounding speed and survivability.

The army is led by a Commander in a Wolf LAV. This light vehicle has been designed for all types of terrain, providing a handy mobile base, made even more maneuverable due to its Titania Pattern Raven transport Dropship.

Plastic Armour & Infantry: These multi-part hard plastic miniatures come on sprues for ease of construction. With easy-to-assemble pieces, youll have your army ready in no time at all. The Condor Dropships are fantastic miniatures, usable by most of the UCM army.
Resin Command: The Wolf LAV provides UCM players with an inexpensive Command choice, cast in fine detailed resin. This miniature comes in two pieces, and fits into the Titania Raven, a redesign of the classic sculpt.
UCM Fastplay Cards & Template: Designed to get you playing straight away, these cards contain rules for all the units in this box. There is also a quick reference card for the full rules, making gameplay easier, and a Dropzone Commander Blast template for any Area effect weapons you might want to use.

Miniatures supplied unpainted and unassembled. This kit will require cleaning and assembly, and could need some small holes filled.