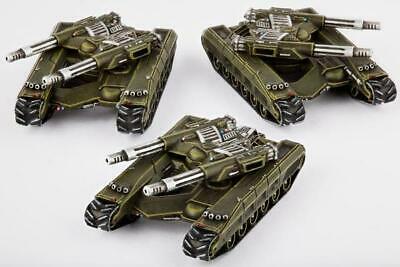 The Katana is built upon a lighter, nimbler version of the more common Sabre-type chassis. In a further effort to save weight, UCM military engineers have also adopted a less power-hungry weapon system; a twin high-velocity cannon, the UM-88T. This armament has a superior rate of fire to the more common railgun, although it does not have quite the same punch or range.

Katanas are typically deployed as flanking units and in theatres where extended time in the field are required. As such, they are becoming an increasingly common sight in UCM advance strike forces and even as armoured support for mobile scout groups. Due to its somewhat lower tech configuration than the Sabre it can also be manufactured in smaller, less advanced facilities than the vast armour works on Ferrum.

The Fireblade is based on the same chassis as the Katana and features the same increased speed as its sister. Unlike the Katata, the Fireblade has a very specific battlefield role; to expunge enemy infantry from structures with its formidable flamethrower!

Background and rules can be found in Reconquest: Phase 1