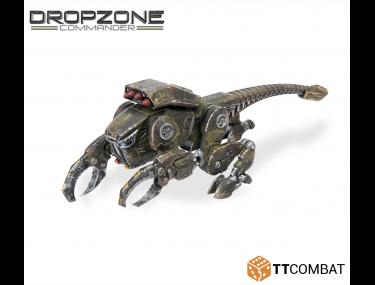 "Rakkon Krell is an unusual figure among Resistance leaders as both a viciously savage feral warlord and an ally of the UCM. Krell was first encountered when he expertly ambushed and captured an entire MF-R team without taking a single casualty. It was when interrogating his captives that Krell first learned of the UCM, a powerful force bent on liberating his home planet of Shangri-La from the hated Scourge. In return, the MF-R operatives learned that the forests of skulls on spikes surrounding Krells lair were exclusively Scourge hosts. It seemed that he valued free human lives deeply, although he had never been above the use of torture and harsh punishment for those that failed him."