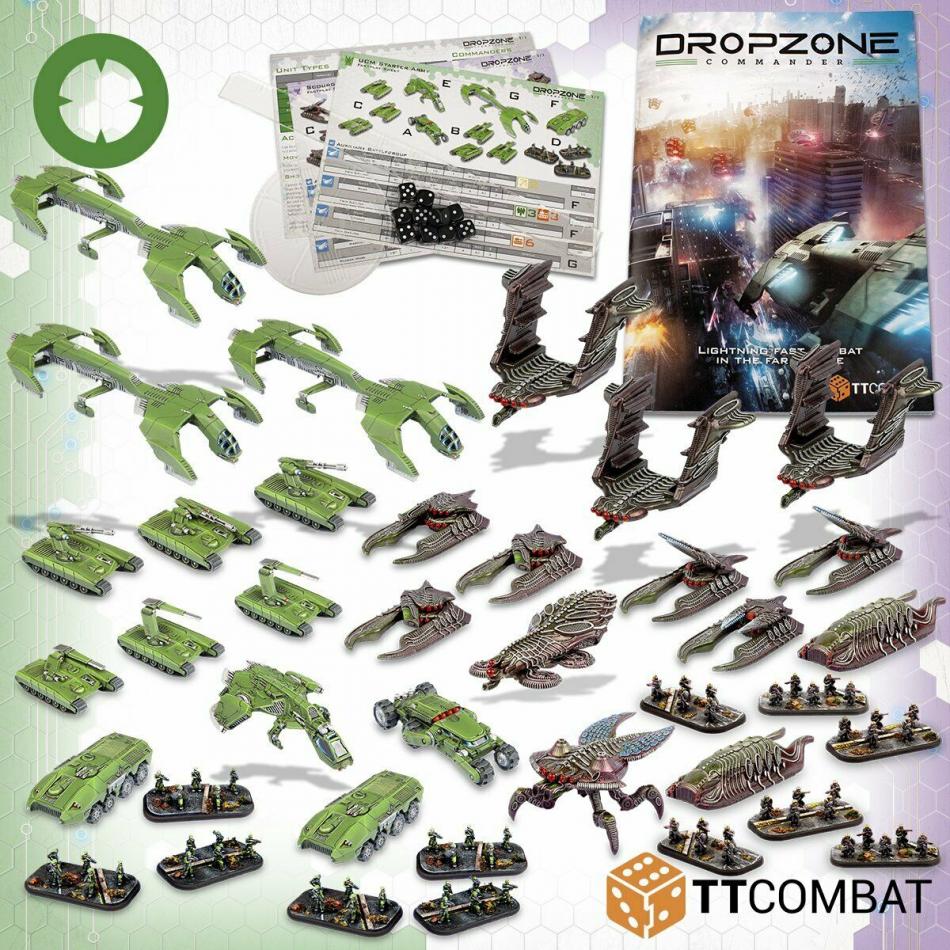 In the year 2507 the Scourge invaded humanitys home on Earth and the Cradle Worlds. Utterly devastating mankind, the alien race dominated the survivors, using them as hosts for their weak forms. Humanity fled to the far reaches of the galaxy, hiding on the Colony Worlds.

Now, 150 years later, the United Colonies of Mankind return, bringing war and the Reconquest to the parasites. The Scourge have had time to prepare, inhabiting living metal machines ready to melt their enemy with deadly plasma weapons. Armed with highly mobile utilitarian vehicles and weapons, the UCM are taking the fight to Earth to rid their homeworld of Scourge once and for all.

Dropzone Commander is a game of mass battle combat in the far future. Speed is key in these warzones, with forces using dropships to quickly redeploy tanks, infantry, and colossal war machines.

Seizing ground and objectives wins games, but a fierce tactical accumen is needed to act and react to your opponents moves. Predicting the flow of battle and positioning all manner of advanced vehicles and creatures is key to victory, to make sure that the Dropzone is yours.

This box contains everything that two players will need to start playing lightning-fast games of Dropzone Commander. The two opposing forces of UCM and Scourge have a range of miniatures with which to fight each other, from the sturdy Bear APC to the utterly alien Hunter grav-tank.

Each army is led by a commander in their own personal vehicle, able to take control of the battle. A 64-page rulebook provides the latest edition of the game rules as well as background stories and scenarios to get you playing. Also included are dice, an acrylic blast marker & range ruler, and fastplay cards to help you get stuck in quickly.

Plastic Armour & Infantry: These multi-part hard plastic miniatures come on sprues for ease of construction. With easy-to-assemble pieces, youll have your army ready in no time at all. There are enough models for two small armies, perfect for splitting with a friend!

Resin Commanders: These highly-detailed miniatures form the centre-piece of your armies. They provide firepower and command abilities on extremely mobile frames. Both miniatures come with their own dropship transport, letting them quickly reposition to get the most out of your leaders.

64-Page Rulebook, Dice, Acrylic Template & Range Ruler, and Fastplay Cards:
This gorgeously presented book has the full rules for the game, accompanied with stunning artwork and background for all factions. Fastplay Cards for all units in the box help you to get playing, and have reference for the most common rules.

Miniatures supplied unpainted and unassembled. This kit will require cleaning and assembly, and could need some small holes filled.