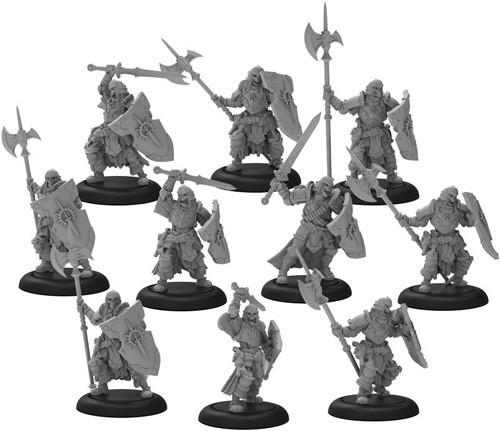 The Legion of Lost Souls is an ancient company of Morrowan mercenaries who long ago stood against a terrible darkness that threatened the whole of Cygnar. Though the company was slain to a man, tales of their valor lived on, and it was prophesized that in a time of great need, Morrow would call the Legion of Lost Souls back to service, and once more they would rise and take arms against those who would threaten their nation. With the arrival of the infernals, Morrow himself dispatched a holy archon to rouse the Legion from deathly sleep to march against those who would claim the souls of humanity for their own dark purposes.

The Legion of Lost Souls is potent undead heavy infantry unit. Heavily armed and armored, they approach the enemy in Shield Wall, taking shots with their heavy pistols before closing into melee with their two-handed swords. Tenacious in the extreme, any of the unliving soldiers who fall can be replaced by the Blood-Bound special rule as the Legion cuts through its opposition.

Miniatures are supplied unpainted. Preparation and assembly may be required.