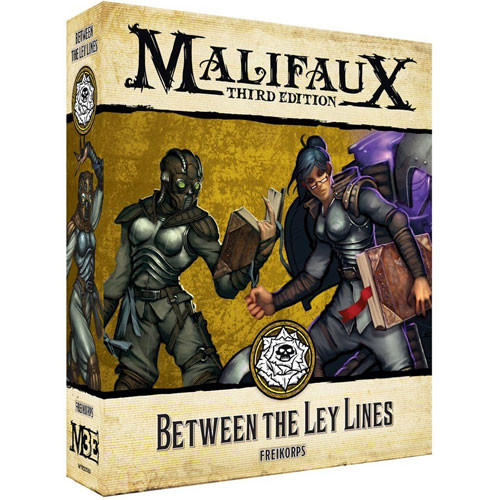 Between the Ley-Lines Product Description

Models are now hired based on their Keyword, which encourages more thematic Crews while allowing for abilities that more closely tie models together. Ever wanted to run two (or more) Masters together on the tabletop? Now you can!

The number of Conditions in M2E has been reduced down to 11 single Conditions. As well, several Masters and Crews that once relied on conditions to function now use Tokens that serve as counters for their various abilities, whether they be deadly plagues or a crippling addiction to the raw essence of the Hungering Darkness.

Nekima has reclaimed her birthright! Standing alongside her is Euripides, a prophetic giant who has followed the omens from his frozen mountain home into the lowlands. The Guild has responded by promoting the brutal Captain Dashel, elevating him to the position of Master... and providing him further assistance in the form of Cornelius Basse. These heroes must also contend with the recruiting efforts of the ghoulish University of Transmortis and its macabre headmaster, Professor Albus Von Schtook, and the subtle machinations of Youko Hamasaki, the cunning proprietor of the Qi and Gong, a mysterious brothel nestled at the heart of the Little Kingdom.