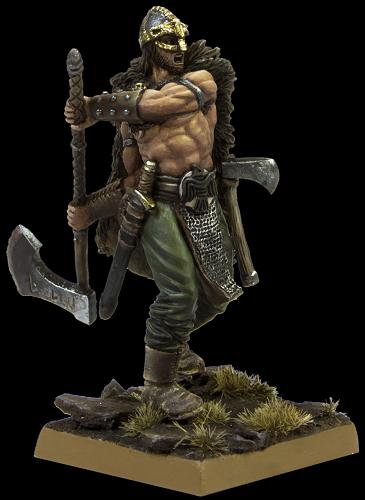 Seven foot tall and near as broad, Eirik Longaxe is almost as legendary as the longship he is steersman of, Hrafnen. A mighty Skei of sixty oars, Hrafnen bears the raven\'s head on its prow, a powerful symbol of Odin\'s favour and a reassuring presence to Hrafnen\'s crew - but a terror to the villages and towns that the mere sight of Hrafnen brings. Eirik himself believes that the wrath of Odin travels with him upon his raids, a belief that holds greater the further he sails and the more treasure he plunders, for he and his crew have always returned home, bruised and battered maybe, but always with gold and silver from the monasteries and halls and villages of the weaker peoples to the west. Indeed, such is his reputation in the shieldwall and on the seas that many other longships and steersmen are drawn to his banner, greedy to take a slice of the pickings from his raids and his battles, for all know that Eirik understands the sailing of all Midgard and where to strike for plunder like no other Norseman.