Home > Touched By The Abyss 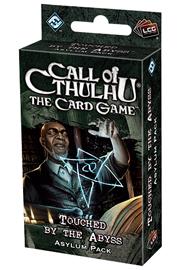 Touched By The Abyss

Touched By The Abyss Product Description

The stakes are grater than ever in Touched by the Abyss, the climactic conclusion of the Revelations cycle! Madmen, cultists, and daring investigators continue to shape the destiny of Arkham, Massachusetts and its surrounding area. While the faculty of Miskatonic University and government agents work to fight the spread of secretive cults, territorial thugs battle with terrible monsters. And the Order of the Silver Twilight seeks the means to forever banish from the world all those who would stop them.

The 60 cards, 3 copies each of 20 different cards, in Touched by the Abyss relate the dramatic finale to the struggle for control of dread Tomes like the infamous Necronomicon. The game's rival factions realize the desperate need for knowledge to fuel their plans, and Touches by the Abyss reveals four new Tomes, six sweeping and thematic conspiracies, and a host of new characters as humanity battles the forces from beyond for the power over life and death!

Contains cards 101-120 of the Revelations cycle.

This is not a standalone deck; you must have additional Call of Cthulhu LCG cards to play.