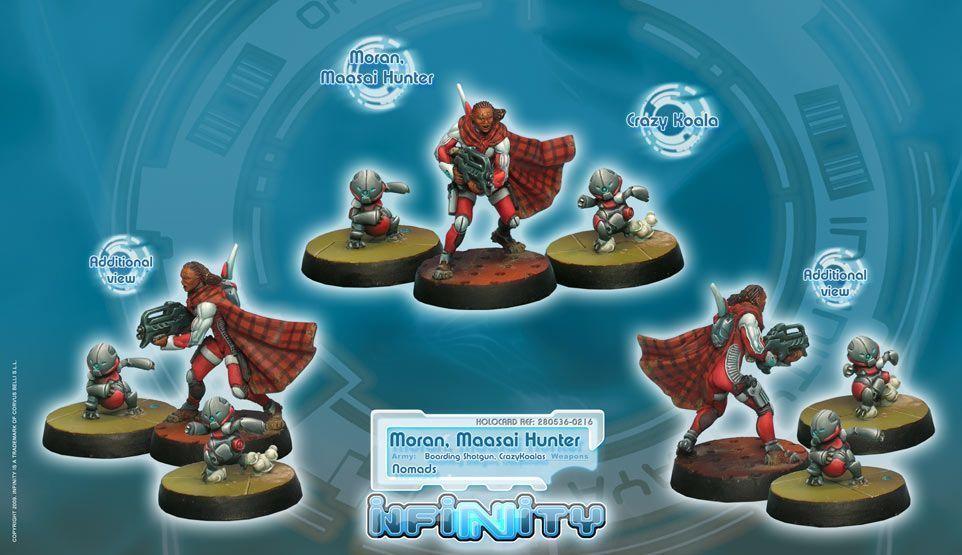 if there is an african tribe which has been idealized, and that represents the african continent, it is the maasai tribe. noble, valiant and hardened, they are a society of warrior-hunters. however, none of this prevented them being crushed by the forces of history. displaced to corregidor, they have had to adapt and find new occupations and objectives for their tribal peculiarities.

in this way the moran, maasai warriors, became the hunters of the nomad military force. designated as light infantry, all of them are experienced skirmishers. their function is to provide intelligence data, becoming the advanced eyes of an attacking force. they also perform âhidden operationsâ, in which their presence must pass unnoticed. in these kinds of missions they conduct irregular reconnaissance and surveillance patrols in forest, jungle and urban terrain. moreover, they carry out assaults against enemy advanced forces and perform delaying actions. when a moran hunter team is assigned as protection for a specific area or region, their primary objective is to hunt down, and capture or terminate, enemy sabotage and reconnaissance units, sniper teams, etc. their mission is to prevent enemy infiltration, sabotage, theft of sensitive materials, and any other activity that might threaten the objective they protect. when tasked with search operations, their main role is to hunt down and capture enemy pilots or aircrew shot down over allied or neutral territory, or track and neutralize spies, enemy intelligence agents or escaped prisoners of war. however, in spite of their training, their sophisticated weapons, and all the technology they use, a moran is easily recognizable by his plaited long hair and cloak â leaving no doubt this is an african regiment. this also means tribal markings and hairstyles, superstitions, amulets and magical propitiations aimed at converting enemy bullets into water, but only if the proper rituals are followed exactly. it may seem exotic, even funny, but no-one laughs when they open your chest with their machetes to drink the blood which sputters from your dying heart.