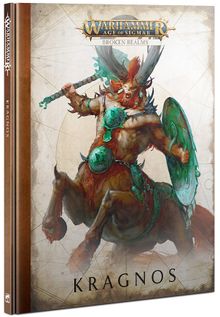 An ancient god awakens as the Broken Realms tremor beneath his furious stride. Kragnos the End of Empires has risen from his imprisonment to seek vengeance on those who locked him away for so long and will level anything in his path there. He joins up with Gordrakk Fist of Gork to utterly decimate the city of Excelsis, unleashing aeons of anger and captive rage. However the city is already under siege by the forces of Slaanesh seeking to corrupt it for their own means. The defenders of the city are trapped with their backs against the wall when an unsteady alliance forms to create a valiant stand. Lord Kroak of the Seraphon returns in aid of the city while Alarielle's Rite of Life spell raises new allies but will it be enough to change the fate of the doomed city. This book has plenty of new rules and lore for Age of Sigmar including: - The story of Alarielle's Rite of Life, how it awoke a forgotten god, and the epic siege of Excelsis - Warscrolls for a host of new gods and champions - including Kragnos, the twin aspects of Slaaneshâs Newborn, Warsong Revenants, and witch hunters Galen and Doralia ven Denst - New rules for Gloomspite Gitz, including three suites of allegiance abilities, updated warscrolls, and more - Even more rules content for Cities of Sigmar, Skaven, Beasts of Chaos, and Sylvaneth, designed to represent these forces in the story - Updated warscrolls for Alarielle the Everqueen and the venerable Lord Kroak - Six exciting battleplans that chronicle the rise of Kragnos, and rules to play them as a narrative campaign - Realms of Battle and Streets of Death rules depicting the locations from the story