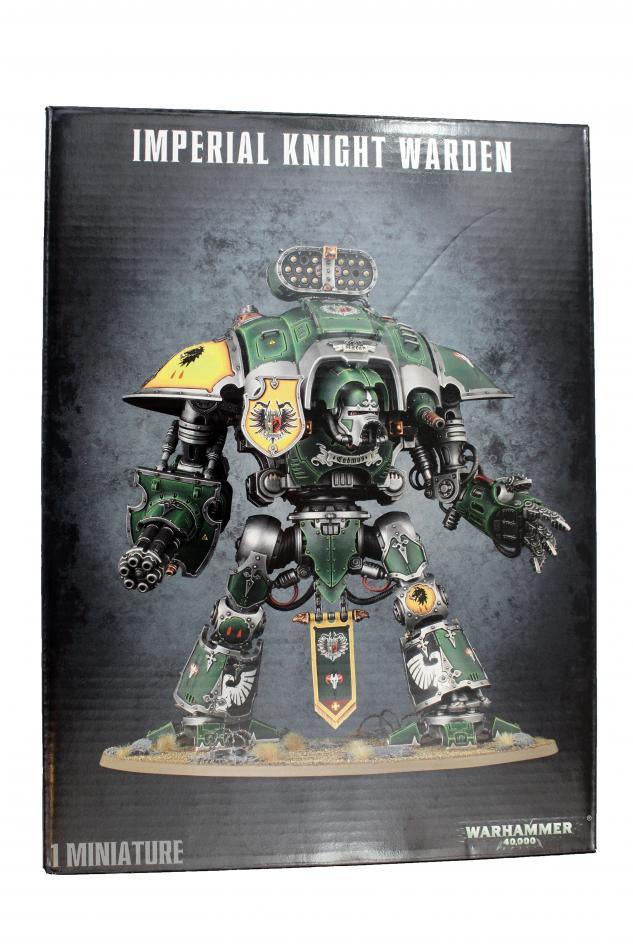 The Imperial Knight Households pre-date the Imperium in the annuls of human history and stand apart and within its structure. The descendants of hardy colonists whose homes are constructed from Dark Age technology salvaged from their original colony ships the Knight Households have evolved into feudal societies governed by ritual and ceremony. Custodians of pre-Imperial technology they protect their worlds using mighty battle suits, nearly as massive as a scout titan! This multi-part plastic kit contains the component necessary to build an Imperial Knight Warden. Armed with an avenger gatling cannon and reaper chainsword, this is a shining example of Imperial Knight might  everything about the model is imposing, from the aggressive faceplate to the brutally industrial-looking exposed hydraulics system that power its assaults. Included in the kit are 4 frames of plastic components, broken down as follows: - A frame of Imperial Knight carapace components,including the carapace itself, engine block assembly, shoulder pads, shoulder joints, 2 sets of carapace heraldry and a heavy stubber; - A frame of Imperial Knight leg components, including the leg and feet assemblies, greaves, waist assembly, chestplates, 2 faceplates, a pennant, tilting plate and armour plates for the knees and groin; - A frame of Imperial Knight weapons, including a thermal cannon, rapid-fire battlecannon, heavy stubber, 2 alternate faceplates, and torso assembly; - An Imperial Knight Warden frame, including a thunderstrike gauntlet, avenger gatling cannon, carapace mounted twin icarus autocannon, carapace mounted missile launcher with the choice of either ironstorm, shieldbreaker, or stormspear missile pods, meltagun, 3 alternate faceplates, and tilting plate. Use those frames to build the basic Imperial Knight structure, add a reaper chainsword and avenger gatling cannon, and you have an Imperial Knight Warden. This kit can be built as either a Knight Warden, Paladin, Errant, Gallant, or Crusader  the weapons and faceplates are interchangeable and can be used as spares for any other Knight kits you might have. The Knight Warden is supplied as 250 components, and includes a Citadel 170mm Oval base, and a transfer sheet featuring heraldry for Imperial Knights.