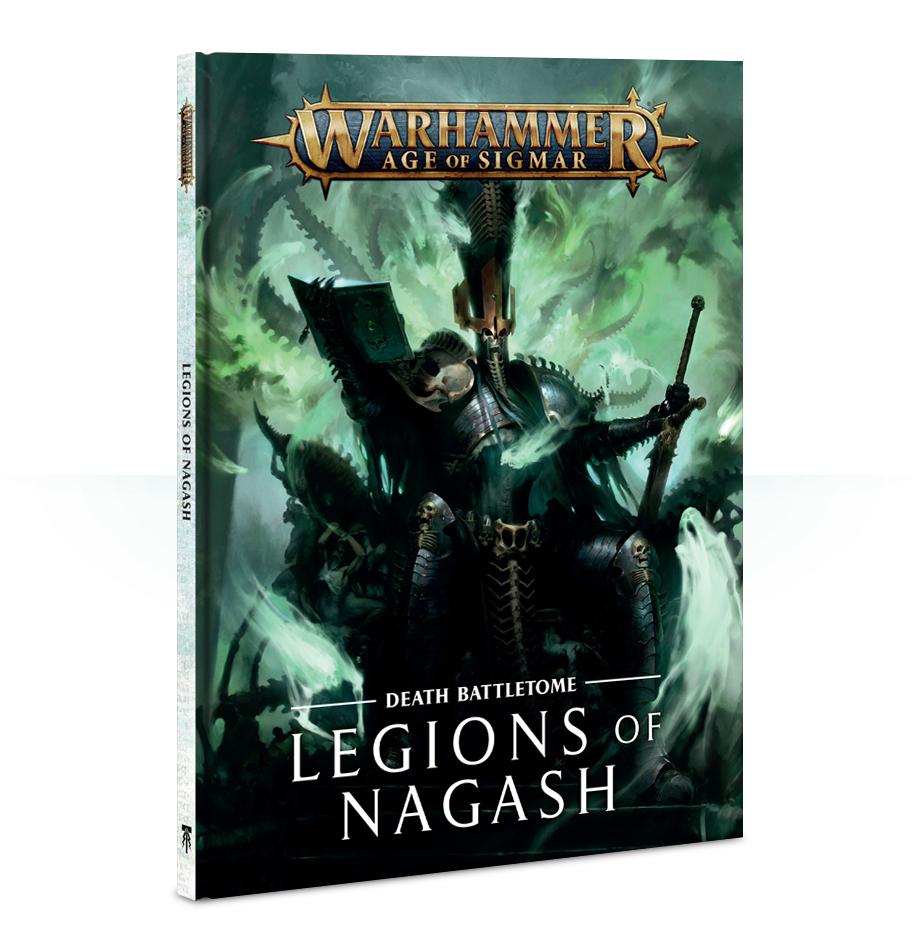 In the 120-page hardback Battletome: Legions of Nagash, youll find: - The Lord of Undeath: a description of Nagashs place in the grand scheme of the mortal realms, the undead creatures that serve him and an overview of the plans he has  elimination of all life and the expansion of his empire; - The Missing Souls: previously, an uneasy alliance  or at least a mutual respect  existed between Nagash and the God-King Sigmar; in this section, learn how that alliance fell apart; - The Realm of Death: a description of Shyish, a realm of endings and underworlds uncountable, and Nagashs domain; - The Legions of Nagash: an overview of Nagashs armies, and how Mortarchs are employed to lead them into grim battle; - A Legacy of Darkness: a timeline covering Nagashs exploits dating back to the Age of Myth, with key events and battles leading to the present time; - Detailed background on the forces available to Nagash, including his Mortarchs, Soulblight Vampires, Nighthaunt Spirits, The Deathrattle Legions, Deathmages, and Deadwalkers; - A showcase of beautifully-painted Citadel miniatures, with an example army; - Painting your Legion: expert painting advice including stage by stage examples of painting bone, zombie flesh, rusted blades and banners, with special effects including adding gore, grime and dirt to your miniatures. Rules All the rules you need in order to get your Legions of Nagash army ready for the gaming table are here: - 33 Warscrolls, covering every miniature in the Legions of Nagash faction; - 6 sets of Allegiance Abilities  the Grand Host of Nagash, Legion of Sacrament, Legion of Blood, Legion of Night, Soulblight, and Death  each with their own unique Artefacts of Power, Command Traits, Battle Traits, and Command Ability; - 2 different Lores of the Dead  Lore of the Deathmages, and Lore of the Vampires; - 2 Battleplans, each featuring guidance on army compositions, objectives, specific Command Abilities for both sides, set-up and victory conditions; - Rules for setting up a Legions of Nagash warband for a Path to Glory campaign, including a Champion Rewards Table, Monster Followers Rewards Table, Followers Rewards Table, and Path to Glory warband roster; - Pitched Battle Profiles for every unit and miniature featured in this Battletome.