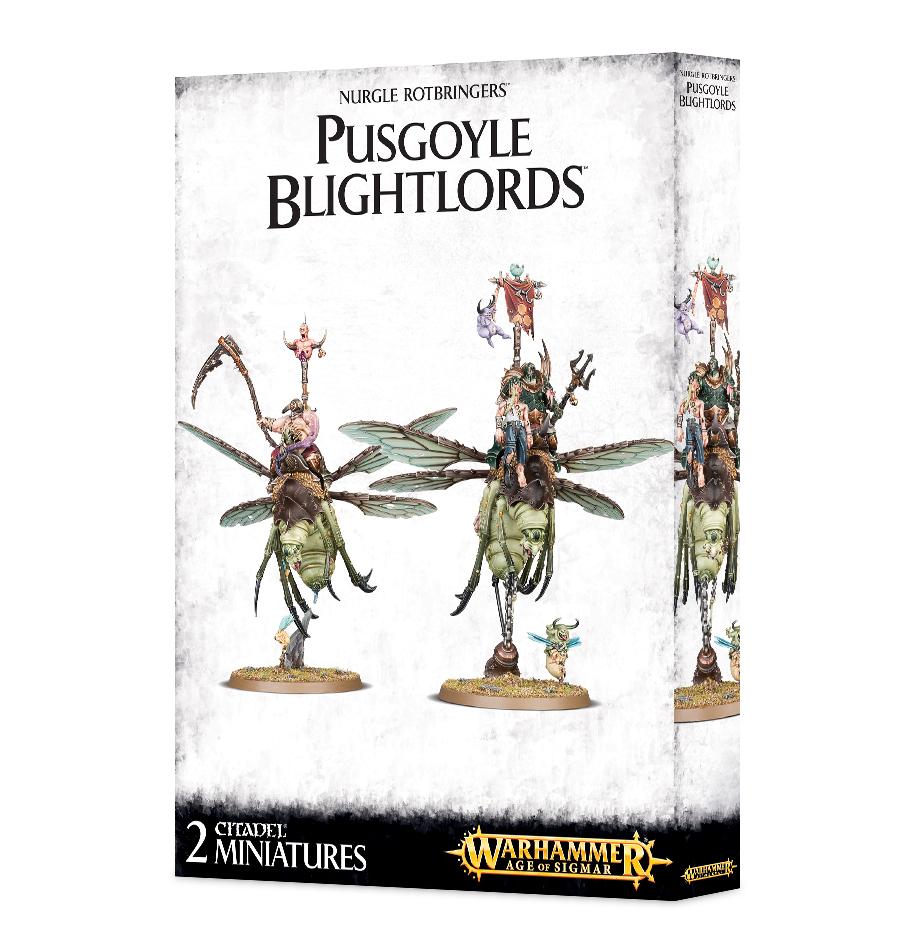 Pusgoyle Blightlords are Nurgles favoured champions. Gifted with foul insectoid mounts by their master, the Blightlords close quickly with the enemy upon pestilent wings of death. Their great scythes reap the souls of mortals and spread disease and panic throughout the foes forces, causing battlelines to crumble and break allowing the slower Rotbringer units to crush the enemy utterly. This multi-part plastic kit contains the components necessary to assemble 2 Pusgoyle Blightlords. Each is mounted on an enormous Rot Fly, a revolting insect with 4 brittle wings that drips and drizzles foul fluids onto the battlefield as they drone through the skies. These flies are bloated and spindly at the same time, with numerous beady eyes and horrible fangs. The Blightlords themselves are particularly grim  1 features a toothed maw in his distended belly, the other a series of veins, tentacles and Nurgle icons. Both models have large poles attached to their backs  you have the option of modelling them with either a cloth banner, a metal icon of Nurgle or (and this is really something) an impaled, rotting cadaver with an expression of sheer agony. They wield massive blighted weapons, with choices of scythes or a trident, and come with choices of covered or bare heads, equally grisly in detail. 3 Nurglings accompany them  1 with a censer, 1 riding a tiny drone and 1 chewing gleefully on his own intestines The Pusgoyle Blightlords come as 76 components, and are supplied with 2 Citadel 60mm Round bases. This kit can be optionally used to assemble a Lord of Afflictions.