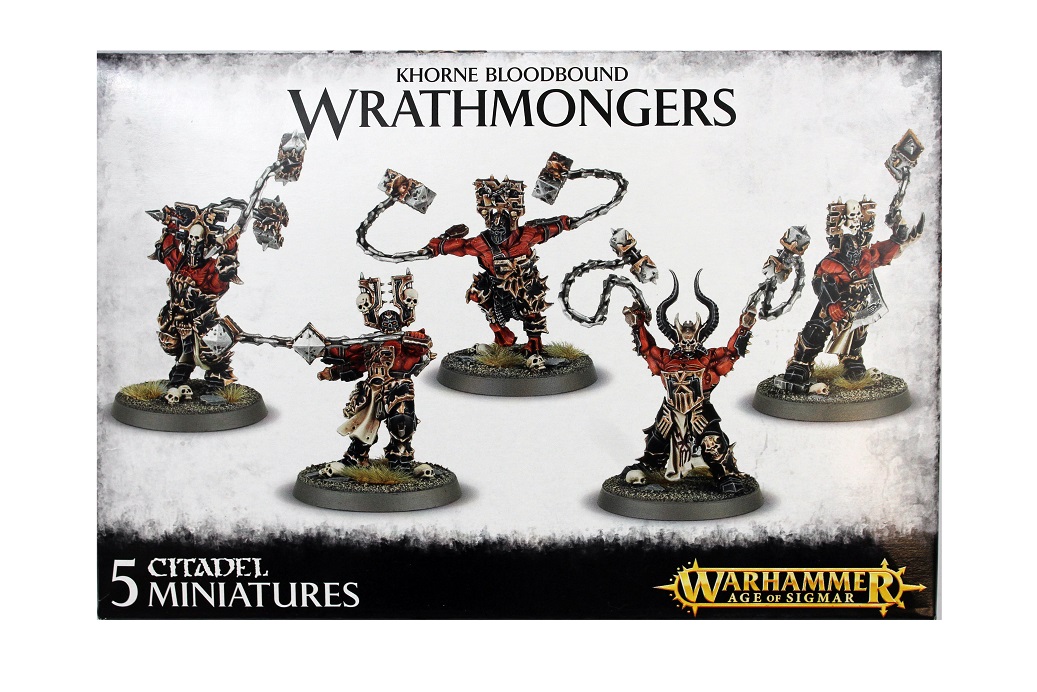 he God of War calls fourth his minions to bring chaos and destruction to the Warhammer World. Gathering skulls for his throne, for he does not care from where the blood flows. Those who has shown more cruelty and joy in the act of killing, those who fury can never be sated, are blessed by their daemon master and are recruited in to the ranks of the Wrathmongers. Chosen, with the skill and thirst for blood to challenge the best of other race has to offer. This multi-part plastic kit makes either five Khorne Wrathmongers or five Khorne Skullreapers. There are five sets of armoured legs (one of which is designed to look like a Bloodletter) and a choice of 10 torsos that can be used to form the basis of the models. Alongside this, there is a choice of 10 individually designed sets of armour that fit to the torso fronts with the option to add additional shoulder armour. Whichever unit type you choose to make there are enough parts to include a champion and standard bearer for either. The Wrathmongers are each armed with a pair of wrath-flails. There are five helmeted heads and the option to distinguish the champion with the addition of a helmet designed to look like a Bloodletters face and a mutation in the shape of a scorpions tail. Armed with two hand weapons, the Skullreapers have a choice of 13 individual weapons ranging from swords, axes, maces and knives, as well as the option to arm one of the models with a double-handed axe. Alternatively, they can be armed with pairs of ensorcelled weapons of which there are 8 different individual weapons, with the option for one of the models to be armed with a double-handed sword. There are a choice of seven bare heads that sport a variety of mutations, from horns, studded foreheads and even a bestial dog face. Each Skullreaper sports a trophy rack on his back, and the Champion is distinguished by his double trophy rack. The Khorne Wrathmongers have 97 components and are supplied with five Citadel 40mm Round bases.