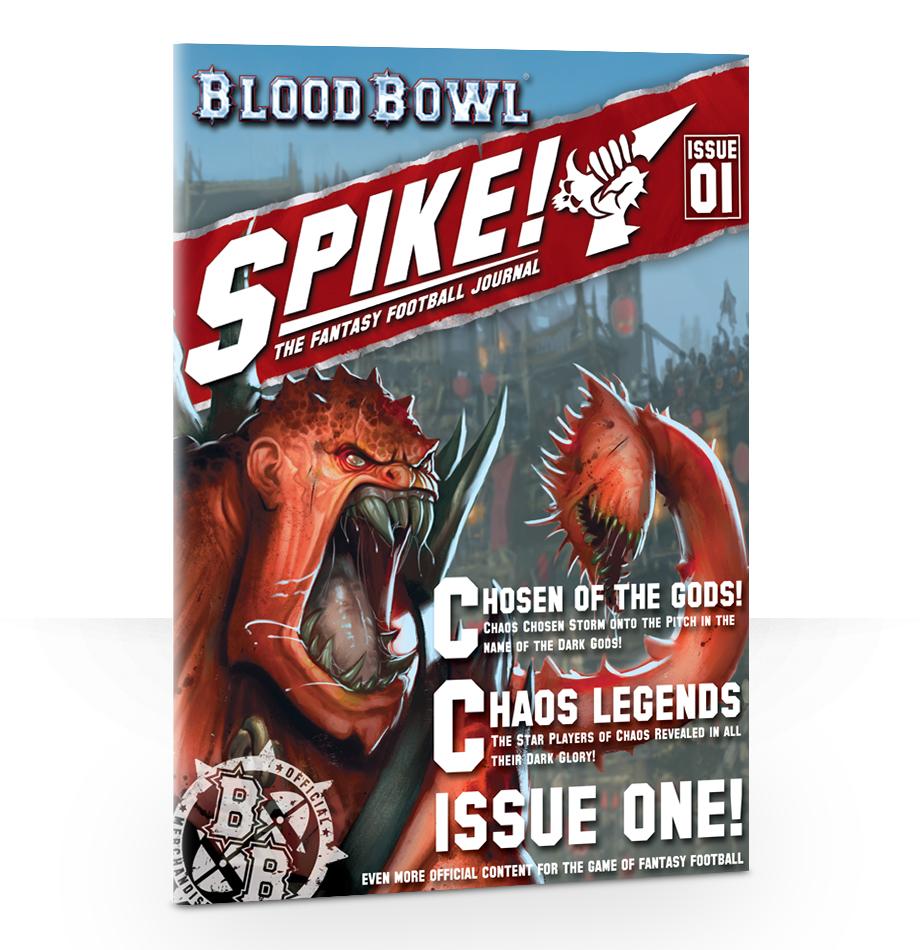 Guest edited by the Head Coach of the Nordland Raiders, Johan T. Mad, this is the very first issue of Spike! Journal. Covering the Chaos Chosen, with a veritable host of brand-new content for Blood Bowl, this is sure to be a must-have for every player  not just Chaos. Contained in the 36-page supplement:
- The Chosen of Chaos!: detail and background on one of the most violent and entertaining teams to ever grace the pitch  the Chaos Chosen. Includes descriptions of their player roles, some of the most notorious teams, a team roster and 10 (count em!) Star Players;
- Magical Moments  rules for adding wizards to any Blood Bowl team, includes using wizards as inducements, available for purchase during the pre-game sequence of league play and Exhibition Matches, along with costs and abilities for Chaos Sorcerers and Hireling Sports-Wizards. Also included are rules for frogs  wizards are more than capable of turning your players into one;
- An in-depth profile of Lord Borak the Despoiler, considered the greatest player to ever take to the pitch in the service of the Dark Gods  including his in-game cost, stats and skills, should you be brave enough to retain his services;
- Star Player Spotlight: Gobbler Grimlich  a profile of this mutant toad who can play for Chaos Chosen, Chaos Renegades, and Underworld Denizens teams, including his in-game cost, stats and skills;
- Star Player Spotlight: Scylla Anfingrimm, Champion of Khorne  a profile of the favoured of Khorne who can play for Chaos Chosen and Norse teams, including his in-game cost, stats and skills;
- Star Player Spotlight: Grashnak Blackhoof  a profile of the great black bull who can play for Chaos, Chaos Dwarf and Nurgle teams, including his in-game cost, stats and skills; - An introduction to coaching Chaos Chosen, penned by infamous Sports Mortician Paulus von Geggster  providing vital hints and tips to set you on the road to glory, this walks you through tactics and setups, with advice on advancing your team as you progress through the leagues;
- Ace Skaven reporter Hackspit Quillchewer chats with famed sports arcanist Rudy Chitterlings about the strained relationship between the Chaos gods and blessed Nuffle;
- Mighty Blow!: Tales of sporting glory from the career of all-time star player Bob Bifford, presented as an all-new comic strip drawn by the legendary Blood Bowl illustrator Pete