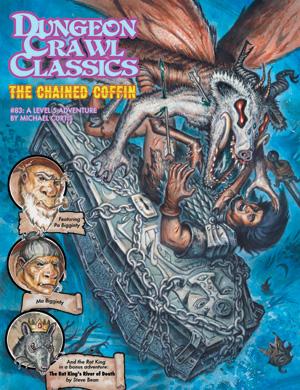 A whispered voice calls from a coffin bound in chains, urging the heroes into the depths of the Shudder Mountains, a place rife with superstition and forlorn secrets. In the shadowy, pine-grown valleys of the Deep Hollows lurk mysteries of a bygone age and a new evil emerging from the ruins of the past. The adventurers must plumb the mountains secluded reaches to root out this rising terror before its power comes to fruition. Standing in their path are cackling witches, subtle devils, lingering spirits, and a foul thing that moves in the night. Can the heroes appease that which lies within the Chained Coffin and thwart the dawn of a new and terrible age?

Beyond the ancient bridge is a 40 wide, 30 deep ledge that lies perpendicular to a sheer rock face. Set into the rocky cliff at the far side of the ledge stands a great stone archway sealed by an imposing door. Blue bolts of lightning ripple silently across the doors face, hinting at magical wards or seals. In the center of the door are three circular dials set one inside the next. Each dial bears several different symbols, no two of which repeat.

Artist Doug Kovacs has rendered this door in a beautiful player handout (see image below). Whats the solution? Who on earth knows?

To add additional replay value, author Michael Curtis has also designed five additional game mechanisms that utilize the spinning wheel (more puzzles, magic items, etc.). These are included with the adventure module and can be used in your group\'s future adventures.

Bonus Adventure: This module also includes the bonus adventure The Rat Kings River of Death, by Steven Bean. In this level 1 adventure, the Rat Kings cultists have summoned a diabolical rat-devil and begun the process of corrupting a small village. The adventurers must put an end to this plot!

Inside the Box: The Chained Coffin Kickstarter allowed us to expand the product from one book to many! The limited silver and foil editions are packaged in a box that includes four additional booklets plus an 11x17 map!