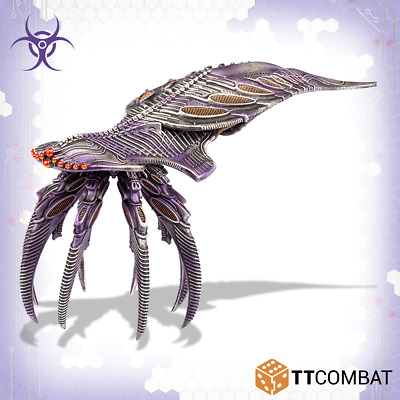 The sinister Desolator is perhaps the most feared of all Scourge engines of destruction. Its distinctive floating silhouette is mainly derived from its colossal weapons system, the shocking Ion Storm Generator. The majority of the enormous aircraft's power matrix is dedicated to feeding this vast superweapon.

Due to the Ion Storm Generator's indiscriminate lethality, the Desolator often operates away from the main force to avoid friendly fire. Indeed, groups of Desolators are occasionally used to wipe whole grid references clean of enemies, especially when the enemy is without air cover. The Desolator also appears to be occasionally employed in some sort of command role. Clearly, the Scourge leadership caste prefer to take to the battlefield in the most terrifying chariot their prolific technology can provide.

The Overseer works in concert with other Scourge forces much more than the Desolator, increasing the destructive capability and plasma energy of nearby units, creating a more insidious threat.

Bizarrely different from most Scourge units, the Overseer has little by way of offensive weaponry in the classic sense. The bulbous structure below the hull houses the Ion Cradle, which feeds energy from the huge power plant into nearby units. This boosts the already potent plasma weapons in its allies, upping their energetic potential considerably. This can be channelled into greater damage at short range causing dismay to the enemy as heavy units die in droves.

Desolators and Overseers are some of the strongest and most useful Command choices available to Scourge, and maybe even in the game!

The Desolator is a hard unit to manage, but given the right setup, you'll be laughing! Its Ion Storm weapon has two firing modes - one excellent at rooting out enemy infantry from Garrisons or even dealing with heavily armoured vehicles. The other mode hits literally everything within 12". Friend or foe! Scenery gets hit D6 times too, which means this unit can be colossally dangerous to pretty much everyone. Use it wisely!

Being aggressive suits the Desolator, but the Overseer requires a more considered approach. Its Ion Cradle has a lot of low Energy shots, but the real benefit is its ability to cause re-rolls to damage with all plasma weapons within 9". That's massive, especially if you build your army around making the most out of it. Think of it like a free Command Card every time you shoot a plasma weapon!

Contains 1 resin miniature with a choice to make a Overseer or Desolator. These miniatures are highly detailed, approximately 109mm in length.