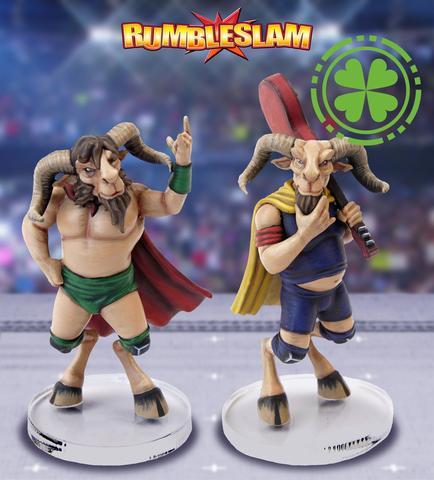 No doubt youve heard of Relentless Dosh from their sellout arena tours, but this gifted duet are also incredibley skilled fighters! Using their own music as an introduction, the dynamic duo jump into the ring to greet their roaring fans. Dripping with charisma, the two fauns enjoy a popularity that is seldom matched in or out of the ring. When it comes to fighting, however, they are like night and day. Wonderkid uses his incredible presence to turn any potential nay-sayers into diehard fans whilst Nasty Goat focuses on brutal brawling. They claim to know the greatest attack in the world, but refuse to ever perform it. Instead they perform a tribute which is still a marvel to behold as they launch their opponent flying through the air.

At 275K each, Relentless Dosh are actually the cheapest tag team currently on offer! Don\'t let that fool you though, they move quickly, and can bring on the hurt when needed.

Wonderkid is a face, and Nasty Goat a HEEL, so hope for the right reactions from the crowd! Both Crowd Pleasers give every friendly wrestler a +1AP counter though, which is a massive bonus to any team. And considering Wonderkid\'s Pile Drive To The Face Grapple Ability (longest move name yet?) has the Crowd Please special rule, that\'s going to be happening a lot! Nasty Goat doesn\'t fall behind though, as Quitter knocks down opponents and also picks them up!

Their Tag Ability is named Tribute To The Best Attack In The World (okay, that\'s definitely the longest move name), does a bunch of damage and shoves the opponent 8 squares! That means you can really control the action in the ring.


Honestly I don\'t know who these two aren\'t great choices for. They can hold their own in a fight, have a great Crowd Pleaser, and so many other useful skills. As a Forest Soul team they obviously pair well with the Timber Fists, giving them a whole bunch of tools to use, and the +1AP really helps the Amazonians to do their Turnbuckle Abilities and have AP left over to finish off (or throw out) their opponents.