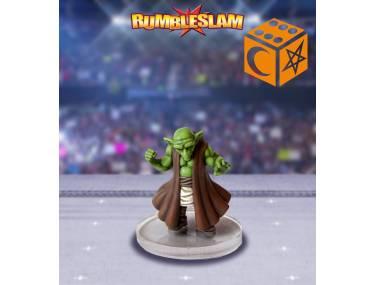 Wrestling is a sport for the physically gifted. Or so everyone thought until this mysterious goblin entered the ring. Wielding a special power alongside his seemingly inhuman dexterity, he joined Rolling Bones casino and waited for his debut. It was a match to remember, though only a handful of fans remained to watch the small superstar battle. Assuming his team would lose easily, many missed him pushing and pulling his opponents around the ring with nothing but a wave of his tiny hand. Despite his clear superiority, Gobba didnt mock or belittle his adversaries at all. It was almost unheard of to watch a wrestler wait for his opponent to stand before striking again.

Gobba has some weird stats. His Dexterity is the highest in the game, and he uses it as his Defence too, meaning he\'s extremely hard to damage at all. He\'s fast too, so good luck catching him! Although with such a low Defence, Grapple, and Stamina, he\'s delicate too.
Gobba is the ultimate support Superstar. There Is No Try is an Active Ability that allows you to move an enemy wrestler 3 squares in any direction, putting them in the best place for you and the worst place for them! And his Crowd Pleaser removes all negative counters from friendly wrestlers.

Considering the all-out attack nature of the Green Bruisers, Gobba complements them perfectly, giving them some much needed defensive stability.

Miniature supplied unpainted and unassembled with a unique character profile card and base.