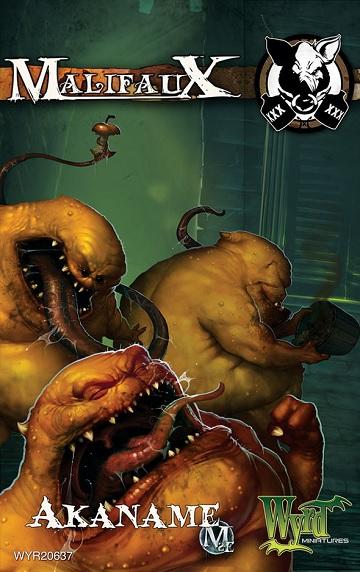 Akaname are Oni which embody filth. Theyre squat, orange-brown slabs of muscle with gaping mouths and sharpened tongues that will eat just about anything, from refuse to bloated corpses.

They are drawn to putrid, disgusting cesspools. Which they feed on in order to become stronger. Given this, it should be no surprise that many of them are drawn to Gremlin villages where they revel in the muck and refuse of the pig pens.

At first, the Gremlins chased the little Oni away, reasoning that they were trying to eat their pigs. Over time, however, the Gremlins eventually came to a sort of agreement with the ravenous little Oni, who were all too happy to devour the refuse left behind by the pigs so that the Gremlins didn't have to deal with it themselves.

The Gremlins now leave the Oni to their filth, and the Oni help to defend the Gremlins' villages from invaders. The Oni are only happy to do it; nobody creates a mess like a Gremin, and a battlefield offers just as many tasty treats as a befouled pig pen. They often squabble amongst themselves for the vilest treats, and gambling on which Oni will win has become a popular Gremin pastime.