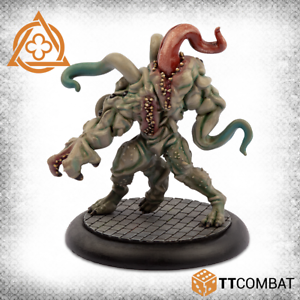 Dabbling in magic is never an exact science. Every time a mage peers through the Rent in the Sky to draw eldritch energies from beyond, theres a chance that the spell will do something else entirely, even when performed perfectly.

The Starspawn is what happens when a spell goes awry, summoned through from elsewhere into the world. A writhing mass of tentacles, mouths, and other appendages, a Starspawn is little more than a ravening beast. Although from a similar place to the Rashaar, it owes no loyalty to anyone, and at best it can be herded towards an enemy, though always with the worry it will turn and attack its "allies".

This set contains a Starspawn, one of the premiere magic hunters in Carnevale. With great attack ability, movement, and loads of special skills, its a force to be reckoned with. The real draw is the Thirsty rule though, which allows the Starspawn to move whenever an enemy mage casts a spell. Take that, witches!

The Starspawn is a Gifted character, which means it can join the Commedia dell'Arte to make a full (very weird) gang. But as a Gifted, it can also be taken in any other faction, giving your gang a witch hunter without compare (or many brains, but you can't have it all).

Contains 1 resin miniature and 1 plastic base. Cobblestone base pictured not included.