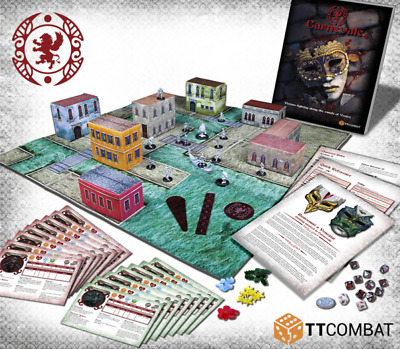 Venice, 1795. A great tear has opened, ripping the heavens open. The Rent in the Sky sank most of Europe beneath the waves, but the City of Canals stands unscathed. Positioned to take advantage of the situation, the people of Venice are fast becoming a new world power.

Yet life under the Rent in the Sky isnt without its problems. Bubbling under the surface of the city is a madness, fuelled by Eldritch beasts that have found a way through the Rent from another reality. The Rashaar are silently growing in number, living in the canals. While their existence is kept secret from most, the Guild makes secrets their trade. With hands in pockets across Venice, this shadowy band of thieves is becoming more powerful than even the Doge would like to admit.

Taking to the streets at night to conduct their elicit affairs; the Rashaar and the Guild frequently clash, met with rival gangs from all over, masked and armed. Violence is common under the light of the Rent, the canals often run red with the previous nights deeds while the city carries on with its business and revelries.

This boxed set has everything you need to get started in the deadly world of Carnevale. With full rules, extensive background, two gangs of intricately sculpted single-piece miniatures, and even a full game board to play on, this is the easiest way to dive into the canals and start playing.

With an emphasis on running, jumping, scaling walls, leaping across rooftops and then jumping onto your opponents from above, the game offers a unique setting with rules designed from the water up to complement the city of Venice. Throwing enemies off buildings and drowning them in the canals is only the start; with dozens of scenarios to play, this narrative skirmish game will keep you slipping your mask on night after night to take control of Venice and uncover the secrets of the Rent in the Sky.

This massive box contains so many components!

16 unique resin miniatures  8 members of the Guild including the enigmatic Capodecina and the harpoonthrowing Fishermen; 7 Rashaar led by the mysterious Magi-Rashaar, and backed up by beasts like the Lesser Ugdru and towering Raadru. Theres even a gondola to paddle around the canals! These miniatures are all one-piece, meaning you can get playing with minimal assembly time.

Carnevale rulebook  the complete 240-page book filled to the brim with background and easy-to-learn rules. There are sections on each faction in Venice, as well as a campaign for each, offering 35 individual scenarios to play through.

8 cardboard buildings and 9 cardboard gaming tiles  allowing you to build a district of Venice in mere minutes, these buildings fold together and apart, allowing for easy storage. The 1x1 gaming tiles are double-sided, with canal sections on one side and water sections on the other, giving you thousands of options for gaming.

Benvenuti a Venezia campaign book  teaching you how to play the game through a series of narrative scenarios. Also included are quick reference sheets for ease of play, and character cards for each miniature in the box.

Dice, templates, ruler & counters  12 ten-sided dice to use for Carnevales Destiny Dice mechanic, as well as 2 templates and a ruler cut in red acrylic and enough acrylic counters for keeping track of various effects. Theres even a metal coin, perfect for deciding first turn and for using as an objective.

Resin miniatures supplied unpainted and unassembled. This kit will require cleaning and assembly, and could need some small holes filled. Acrylic may have a peelable film.