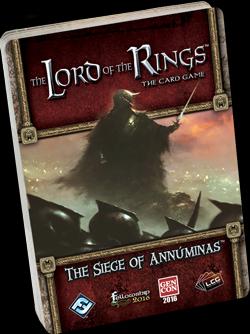 Join the descendants of kings for a dramatic stand against the forces of evil! The Siege of Annúminas is a special standalone scenario for The Lord of the Rings: The Card Game.

This is not a stand-alone game. A copy of The Lord of the Rings LCG: Core Set is required to play.

It can be played by 1 to 4 players like any other scenario, or it can be the foundation of an even larger experience when played in its new Epic Multiplayer mode. This mode requires three copies of the scenario, but allows as many as twelve players to fight side-by-side against the hordes of Carn Dûm!