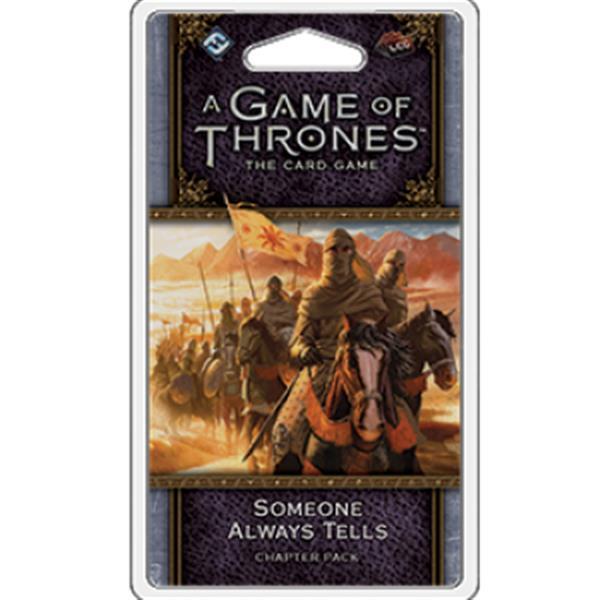 As A Feast for Crows draw to a close, countless conspiracies are revealed. Victarion Greyjoy has been dispatched to Essos to fetch back Daenerys Targaryen, but secretly, he plans to win her for himself. Arianne Martell plots to crown Myrcella Baratheon and lead a new rebellion in Dorne. House Lannister, House Tyrell, and the church of the Seven bicker for power in Kings Landing, and Ser Jaime Lannister turns his back on his sisters plea for aid. Now, you have the chance to bring these conspiracies to your own intrigues in A Game of Thrones: The Card Game.

Someone Always Tells is the sixth Chapter Pack of the Flight of Crows cycle, and it brings a fitting conclusion to the major themes explored in this cycle. As with the other expansions, youll find new cards with the bestow keyword, an attachment and a location devoted to the faith of The Seven, and cards that reward players for forging alliances between the factions. Youll also discover plenty of recognizable characters and locations from the saga that you can add to your decks, such as Mace Tyrell, Qyburn, and the Great Sept of Baelor.