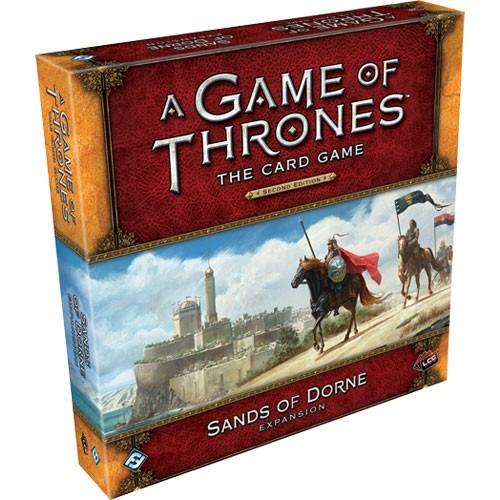 House Martell has waited long for vengeance. Seventeen years have passed since the death of Elia Martell at the hands of Ser Gregor Clegane and the invading Lannisters during Robert's bloody rebellion. Over those long years, their hatred has festered and grown in the shadows. The Martells have been unable to quench their thirst for justice until now...and now, only blood can sate their appetites.

Sands of Dorne is a deluxe expansio, bringing House Martell squarely into the sunlight, giving them the cards they need to go toe-to-toe with any other faction in the game. Here, you'll find powerful new versions of House Martell's most iconic and dangerous characters, all intent on bloody revenge, including Doran Martell, The Red Viper, Ellaria Sand, Quentyn Martell, Nymeria Sand, and Areo Hotah.

The power of House Martell is rising in the south, but far from the deserts of Dorne, the other Great Houses are also setting their plots into motion. Every other faction in the game receives two new non-loyal cards in this deluxe expansion - and when that's combined with a brand-new agenda and an assortment of neutral plots, Sands of Dorne promises to shake up the game like few other expansions can..