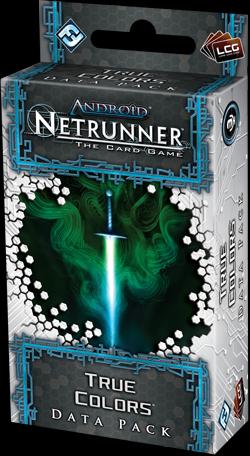 Fantasy Flight Games is proud to announce the upcoming release of True Colors, the fourth Data Pack in the Spin Cycle for Android: Netrunner The Card Game! There are three realities in the world of Android: Netrunner. You have the meat world. There, Corps are massive conglomerations, comprised of thousands of employees, managers, CFOs, and CEOs, all housed in towers of glass, steel, and plascrete. In the meat world, Runners need to eat and breathe and sleep; they may be extraordinary individuals, but you wouldn’t necessarily recognize them as you walked past them on the street.

Then, you have the virtual world. On the net, reality takes on different angles and different hues. It moves at a different speed, and Corps are massive, hulking fortresses, with layers and layers of ice separating their most valuable data from passers by. These layers of ice can take many forms, as boundless as the imaginations of their designers, and Runners encountering them may see them as wolves, walls, or solar flares.

Finally, you have a third reality, equally important as the meat and virtual worlds to all entities as large and visible a the games megacorporations. This is the realm of public perception. Public perception lies at the heart of True Colors, as it lies at the heart of each Data Pack in the Spin Cycle, and the sixty new cards in True Colors (three copies each of twenty different cards) explore new ways that clever Corporations and Runners can manipulate the ebb and flow of public opinion.