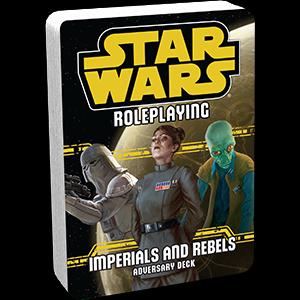 Populate your Star Wars universe with a whole range of potential allies, enemies, and contacts. Three new Star Wars® Roleplaying Adversary Decks each come with twenty cards, representing different NPCs drawn from the Edge of the Empire Core Rulebook, the Age of Rebellion Core Rulebook, or one of their supplements. Adversary cards work with all three of the Star Wars roleplaying systems and present all your adversaries key statistics and information in an easily accessible fashion. Meanwhile, their art and description text help you set the scene and flesh out your NPCs personalities.

Every day, the growing Rebellion threatens the Galactic Empire on new battlefields and in new political arenas. As their military forces clash throughout the galaxy to win the war for either freedom or oppression, each side must also fight for the hearts and minds of the galaxys citizens. Every day, as another reprehensible Imperial action produces new Rebel recruits, many more Imperials hope to rise to power through the ranks.

As Rebel cell leaders, starfighter aces, Imperial stormtroopers, Imperial Moffs, and Bothan spies are all taking sides in the fight for the galaxy in the Imperials and Rebels Adversary Deck. Its twenty NPCs provide you access to all levels of authoritarian enforcers and freedom fighters alike. No matter how the tides of battle may turn, this deck will prepare you for encounters with nearly anyone you might meet amid the heat of the Galactic Civil War.