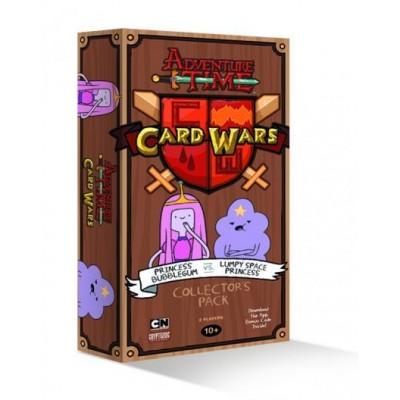 The first smash-hit-sold-out-everywhere game of 2014 is expanding! This time, Princess Bubblegum and her NiceLands deck take on Lumpy Space Princesss totally rad dual-Landscape deck in a royal rumble. First teased in the original two Collectors Pack sets, and then previewed in the For the Glory! Booster packs, NiceLands are finally playable. This new Landscape type is as fluffy as a little bunny nibbling on some grass. But if you give it an owwie on its widdle foot boy howdy, do these guys get vicious!
NiceLands Creatures are all about using the damage on them to make them better. Most Creatures are looking for a particular sweet spot of damage. Sometimes you will want to heal damage from your Creatures to get them there. But sometimes you might actually damage your own Creatures to get them to that sweet spot. This new deck not only brings a new Landscape to the mix, but a whole new style of play.
Lumpy Space Princesss deck is a Useless Swamps and Blue Plains deck. This is the first time a Collectors Pack has featured something other than a mono-color deck. The Useless Swamp side of the deck is themed around discarding cards to power up your Creature abilities. Which is never a bad thing for the swampy side, as they thrive when they have built up a sizable discard pile.
The Blue Plains side of the deck is themed around replacing Creatures you control. Many of the Creatures in this half of the deck get killer bonuses for replacing Creatures that were already in play. It complements the Useless Swamp desire for a large discard pile as well. Such synergy!
97% of all the cards in the set are BRAND-SPANKING new! Just a couple of rainbow staple Buildings have ever been seen before. Only ONE of the cards from the For the Glory! Booster set is repeated here. This Collectors Pack gives you almost 50 never-before-seen cards. This new Princess Bubblegum vs Lumpy Space Princess Collectors Pack is a must-buy for the legions of players rabidly playing this game and still demanding more, more, more!
Sent wonderfully packaged, this incredible Card Game will be sent swiftly and before you know it, it will be sitting proudly on your desk and receiving admiring comments from all your family, friends and colleagues!