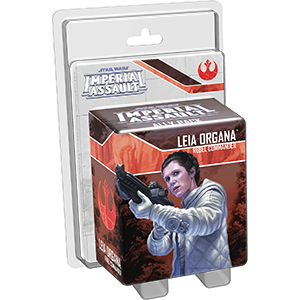 Leia Organa has been a powerful political force in the galaxy, both as a member of the Galactic Senate and as a leader of the Rebel Alliance, where she fights to overthrow the tyranny of the Galactic Empire and restore freedom to the galaxy. With the Leia Organa Ally Pack, you can bring this Rebel diplomat to the front lines of combat.

In your campaigns, the Rebel heroes can help Leia Organa expand the Rebellions web of contacts and allies. In a new side mission, youll install a vital communication beacon on a far-flung planet with Leias help, but you can be sure the Empires forces are ready to oppose your efforts. As she joins your soldiers on the battlefield, Leias natural leadership can help her allies make concerted attacks against the enemy.

Leia Organa is no less dangerous in your skirmish games. A new skirmish upgrade card from this Ally Pack lets you send a Leader character on a diplomatic mission, forgoing combat in favor of peace. Two new skirmish missions force you to successfully navigate a Nelvaanian War Zone, while the Behind Enemy Lines Command card gives you vital knowledge about your opponents tricks and lets you determine which Command cards he receives next. Whether working as a diplomat or a fighter, Leia Organa can lead the Rebel forces in any battle.