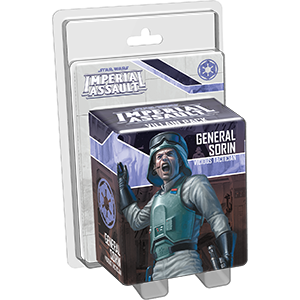 The final Villain Pack in these expansions focuses on General Sorin, one of the Empires foremost military minds. General Sorin leads by example on the battlefield, coordinating attacks and inspiring his own troops to benefit from his abilities. In your games of Imperial Assault, General Sorin is an excellent centerpiece to enhance the potential of every figure in your forces.

During a campaign, General Sorin comes with a three-card Agenda set that plays to General Sorins favored weapons  heavy vehicles and an explosive arsenal. You might play the Armored Division Agenda card to quickly lower the cost of any Vehicle unit, allowing you to bring it into play for a significantly lower cost. Alternatively, you could challenge the heroes to face down a division of AT-STs on Ando Prime with this sets Agenda mission. Whether you use the Bombardment Agenda set or not, General Sorin is a worthy nemesis for the campaign included in the Return to Hoth expansion.

You may also harness General Sorins natural leadership in the Imperial Assault skirmish game. Two new skirmish missions bring you to a Climate Research Camp, where youll fight on a variety of different terrain types set in close proximity to each other. Finally, three new Command cards expand the field tactics of the Galactic Empire, meaning that the General Sorin Villain Pack is an excellent addition to any Imperial strike team in the skirmish game.