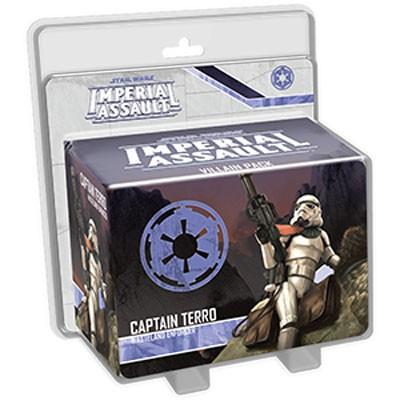 Imperial forces on Tatooine may not have the same sway as Jabba\'s gangsters, but they can still be dangerous and violent - especially if their authority is not respected. Several Stormtroopers have adopted the native dewback as a mount and organized a cavalry division under the command of the vicious Captain Terro. A Stormtrooper mounted on a powerful creature like the dewback is not to be underestimated, and the Galactic Empire gains a new tool in its arsenal with the Captain Terro Villain Pack.


The heroes may come into contact with Captain Terro himself or just a Dewback Rider from his command, but either one would be a dangerous opponent. The dewback mount gives these warriors a prodigious amount of movement, and by striking from the creature\'s back with shock lances or flamethrowers, a single Stormtrooper can cause a massive amount of carnage or split a hero party in two. With a new three-card Agenda set that challenges the heroes to stop a Stormtrooper reprisal against Anchorhead, a new skirmish upgrade, and new Command cards for your skirmish games, this Villain Pack offers a powerful new weapon to every Imperial commander.