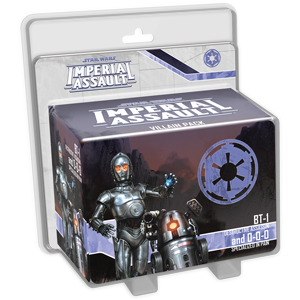 First introduced in the Darth Vader comics, BT-1 and 0-0-0 serve the interests of the Galactic Empire with a special relish for destruction. 0-0-0 is a protocol droid specially equipped to interrogate and eliminate captives, while BT-1 possesses enough hidden firepower to destroy an entire squad of enemy soldiers. With their unique skills, youll be able to field these two droids in any Imperial strike team with the release of the BT-1 and 0-0-0 Villain Pack.

No matter where your Imperial Assault campaigns take you in the Star Wars galaxy, the Rebel heroes will have reason to fear to glowing red displays of BT-1 and 0-0-0. A new campaign Agenda mission challenges the heroes to rescue prisoners from an Imperial interrogation facility on Kessel and youll find a new skirmish map with two unique missions, giving you the opportunity to battle through the twisted corridors of the Tarkin Initiative Labs.