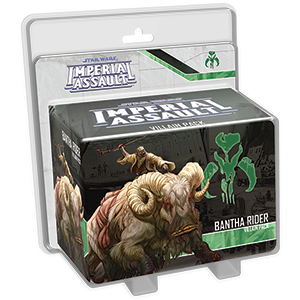 The indigenous people of Tatooine, the Tusken Raiders, are known for their lightning-fast raids and ferocious battle tactics as they attack Tatooines moisture farmers. The Tusken Raiders are also known for riding out of the desert on banthas  massive, horned beasts that can easily trample those who anger them. With the Bantha Rider Villain Pack, you have the opportunity to swell the forces of the Tusken Raiders from Twin Shadows and ride a bantha into battle in Imperial Assault.

The power of a Bantha Rider can rout entire squads of lesser figures in your Imperial Assault skirmishes. While the Tusken Raider riding atop the bantha fires at select figures, you can use the Bantha itself to trample your opponents figures, crushing them beneath its massive feet or stampeding into a squad and destroying their formation. Six new Command cards offer plenty of tactical options to any army, but your Tusken Raiders and Bantha Riders could especially benefit from the extra movement and attacks granted by Jundland Terror . Furthermore, the new Coruscant Landfill skirmish map challenges you with two distinct missions that invite you to fully harness the massive size and power of your Bantha Riders.

You can even bring a Bantha Rider into your Imperial Assault campaigns with a new three-card Agenda set, Tusken Treachery. The Into the Wastes Agenda mission challenges the Rebel heroes to rescue a captive abducted by raiders and secure stolen data, but if they fail, the Imperial players forces can take advantage of Tusken Raider weaponry for the rest of the campaign! You may use the other Agenda cards in this set to bring Tusken Raiders or the Bantha Rider into a mission unexpectedly, or to ensure that even a small wound proves dangerous to the afflicted hero.