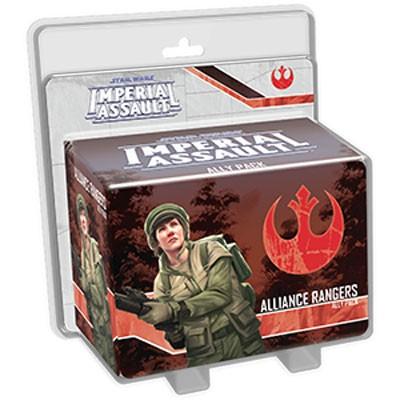 The soldiers of the Rebel Alliance are utterly devoted to the cause, willing to venture into even the most hostile terrain if it means helping to bring down the Empire. Although all of these soldiers are trained in battle, a few truly excel at guerrilla warfare and long-range attacks. These renowned snipers are known as the Alliance Rangers, and they can join your campaigns and skirmishes with the Alliance Rangers Ally Pack.


Alliance Rangers may help a small team of Rebel heroes survive among the dunes of Tatooine, or they may battle Imperial Stormtroopers under the canopy of a mighty forest, but wherever they\'re deployed, these warriors are among the most deadly long-range fighters in the game of Imperial Assault. This Ally Pack comes with plenty of other ways to alter your campaign missions or skirmish games as well. You may travel to the planet Ithor to silence an Imperial recon facility, or move deep into the Nal Hutta Swamps and silently battle another strike team in the backwaters of the Hutt homeworld. No matter which way you prefer to play, the Alliance Rangers are a powerful asset for the Alliance to Restore the Republic.