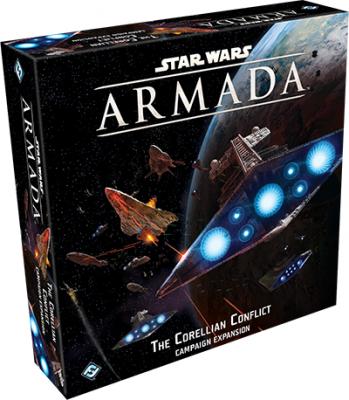 Fantasy Flight Games is proud to announce the upcoming release of The Corellian Conflict, an epic Star Wars: Armada campaign expansion for two to six players!

The Galactic Civil War was not won in a single battle. The epic conflict at the heart of Star Wars saw countless skirmishes, waged in hundreds of systems and over thousands of planets. Even the ancient Core Worlds were touched by the spark of rebellion.

Soon, with The Corellian Conflict, you and your friends will be able to wage strategic battles for key hyperlane routes, seize vital shipyards, establish new bases, and decide the fate of the Corellian Sector. Working as teams, you will take sides with the Galactic Empire or Rebel Alliance, then meet your foes in battle for control of vital worlds. New campaign rules guarantee that your battles have long-term consequences, and the experience you gain from your victories may prove invaluable toward the success of your overall campaign.

Finally, The Corellian Conflict introduces new objectives and squadron cards for use both in your campaign and in standard play. The expansion\'s twelve objectives introduce new challenges and paths to victory. And its sixteen new squadron cards add greater variety to the squadrons from your Core Set, Rebel Fighter Squadrons Expansion Pack, and Imperial Fighter Squadrons Pack, allowing you to field them as some of the most legendary pilots and squadrons from the Galactic Civil War!