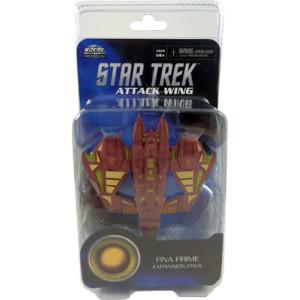 Star Trek Attack Wing is a tactical space combat miniatures game, featuring pre-painted ships from the Star Trek Universe. Choose your captain and crew, board your ships, seek out new life, new civilisations\', boldly go where no man has gone before.

The Vidiians are an alien culture encountered by USS Voyager. A once proud culture of artisans until a horrific disease, known as "The Phage", ravaged the DNA of the race many years ago leaving them with dying bodies and a hideous appearance. After being forced to advance their technology. They now harvest the organs of anyone that crosses their path to extend the lives, before the disease destroys an new implanted body parts in a never ending cycle while waiting for a cure.

The Vidiian Starship Pack is part of the Wave 10 expansion packs from WizKids Games.