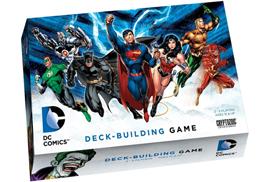 In the DC Comics Deck Building Game, you take on the role of Batman, Superman, or one of their brave and heroic allies in the struggle against the forces of Super Villainy! While you begin armed only with basic combat maneuvers, you will add new, more powerful cards to your deck as you go, with the goal of defeating as many of the DC Comics Super Villains as you can. In the end, the player who has accumulated the most Victory Points from the cards in his or her deck wins the game!

• Play as Batman, Superman, Wonder Woman, Aquaman, The Flash, Green Lantern, or Cyborg. The Justice League is ready for action!
• Each DC Comics Super Hero has a unique special ability that will open up different strategies to the player.
• Card combos, strategy, and fun abound in this game where every card features amazing fan favorite art.
• Compatible with other Cerberus Engine, Heroes games, a common card back means you can mix your whole collection together for the ultimate throwdown!