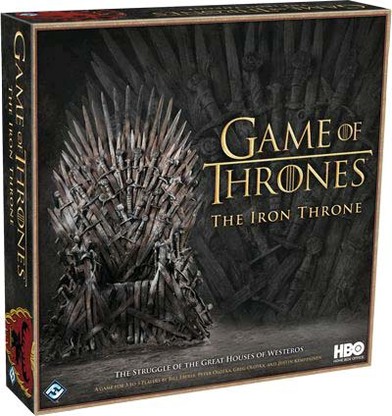 King Robert Baratheon is dead. The line of succession is in dispute, and the Seven Kingdoms stand at the brink of war. Amid the chaos, the Lords and Ladies of the Great Houses of Westeros manoeuvre for supremacy.

Game of Thrones: The Iron Throne is a board game of intrigue and betrayal that pits you against two to four of your friends in a cutthroat bid for command of Westeros. Lie, cheat, steal, bribe, and battle your way to supremacy.. Based upon the thrilling HBO series and using game systems from the legendary board game Cosmic Encounter®, The Iron Throne places you in command of one of five Great Houses and challenges you to land five of your influence on your rivals' Houses.

Iconic characters from the show will help you. Diplomacy is always an option. Betrayals are inevitable. In the end, you win, or you die. There is only one Iron Throne!