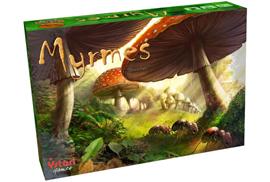 In the kingdom of Myrmes, the ant colonies have been fighting for centuries to dominate their neighbors. To put an end to this war, the council of the queens has decreed that a final battle will decide the issue of the final victory. Send your soldiers and your workers to assault of the kingdom. Fill up your larder, hunt down insects and wisely place your pheromones to conquer the territory. But most importantly, don't forget to prepare for winter!

The game lasts three years, and at the start of each year three season dice are rolled to determine the event for each season, extra larvae or soldiers, more VPs for actions, and so on. Within each season, players can spend larvae to adjust the event for themselves on their personal player board. After adjusting the event, player allocate nurses to birth larvae, worker or soldier ants or to use them for other actions. The worker ants then do their thing, working within the colony itself or traveling to the outside world to hunt prey, lay down pheromones, place special tiles, or clear out pheromones left by ants from any colony. After harvesting, nurses who didn't tend to births then take additional actions, such as opening a new tunnel that only your colony can use, clearing a new level within your colony, or meeting one of the six objectives laid out at the start of the game.