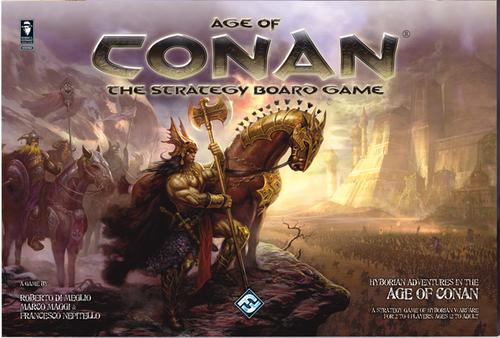 Age of Conan - The Strategy Boardgame

The Age of Conan is coming ...


In the world of Hyboria, powerful kingdoms fight for supremacy, ever striving to expand their borders and increase their riches.


Imperial Aquilonia marches its legions against the witches and monstrous creatures of frozen Hyborea. Elsewhere, dusky Stygia pits its sorcerors and demonic servants against the horse-hordes and cunning diplomats of the plains kingdom of Turan.


Into this age of heroic achievements, and vile misdeeds, steps Conan the Cimmerian. Black-haired, sullen-eyed, sword in hand; he is a thief, reaver, slayer; a man of deep meloncholy and broad mirth. All tremble at his approach, for he comes to tread the jeweled thrones of the earth under his sandaled feet.


The Age of Conan: The Strategy Board Game allows players to each control one of the four major kingdoms of Hyboria. Command armies, wield dark sorcery, or weave cunning intrigue - all are needed in order to conquer your enemies and make your kingdom the most powerful in the world. Yet, even the most powerful of rulers ignores one man at his great peril. Only one kingdom will harness the volatile alliance of the mightiest hero of all - Conan the Cimmerian!